Does your car produce a “tappety” noise every time you start it?

Does the ticking last for several seconds or even minutes while you drive?

These annoying and repetitive sounds are relatively common and are most often the result of malfunctioning tappets, also known as lifter tick.

Noisy tappets are something you can fix at home, even if you are not the most mechanically inclined person in the world.

Today, we are going to walk through the potential causes for lifter noise and what you can do to get rid of that infuriating sound.

A single oil change or the use of oil additives can help you enjoy smooth and quiet driving again.

Hydraulic valve lifters, also known as hydraulic tappets or lifters, are inside every engine.

They are designed to keep the engine valves intact during the process of thermal expansion. The lifters accomplish this by maintaining zero valve clearance.

In a perfect world, the lifters keep your engine quiet. When there is a fault in the machinery, however, drivers are left with a worrisome lifter tick.

Here are a few of the most common reasons why lifter ticks happen, so you can diagnosis the source of the problem:

1. Wear and Tear on the Lifter

Sometimes, Father Time will get the best of your engine parts.

A worn-out lifter can have several consequences, such as the internal plunger failing to maintain the oil pressure, or a distinctive tapping sound.

If you don’t replace the lifter soon, it can affect the reliability of other parts, like the rocker arm, pushrod, and valve tip.

If you suspect your lifter is past its prime, there are usually corresponding indications.

An engine misfire is commonly associated with a bad lifter, and low oil pressure can result in a ticking sound.

The pushrod is one of the few engine parts that are designed without curves as it connects the underside of a rocker arm with the lobes of the camshaft.

The purpose of the pushrod is to open the intake and exhaust valve, though it can be bent if the car is pushed too hard.

The bending can accelerate both lifter and camshaft degradation, resulting in an engine ticking sound.

This scenario is multifaceted when it comes to the source of the problem. For instance, if the oil in your engine is too thick or thin, it can damage your lifter. 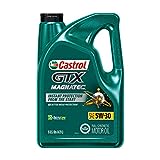 Similarly, a lifter tick may appear when there is dirt build-up along the valve train or inside the lifter itself due to improper vehicle care.

Maintaining the proper oil viscosity is essential when it comes to minimizing the accumulation of dirt and grime, as well as wear and tear on an engine.

A heavy viscosity oil, such as 30W or 10W-40, can provide ideal oil pressure in warm weather, while light viscosity oils, like 10W, flow consistently in colder environments – more on this later.

Most manufacturers recommend an intermediate motor oil like 5W-30, which offers steady flow through the seasons.

Low oil levels cause the same problems as excess dirt. When there is not enough oil for lubrication, the performance of the lifters will suffer.

In a sense, the lifters need oil to maintain their lifting power; otherwise, they fail.

Fortunately, this problem is one of the easiest to diagnose.

When low oil levels are the cause of lifter noise, a flashing low oil light usually accompanies it on the dashboard.

The icon may also turn on if the oil levels are obstructed.

Also Read: How to Soundproof A Car & Reduce Road Noise.

The short answer is ‘yes.’

The longer answer: it depends.

The type of sound the lifter makes, and its duration, can indicate its severity.

If there is only a lifter noise for a few seconds after turning on the engine, that is less serious than a loud tapping that goes on continuously or remains loud while driving.

The problem will not likely be serious, though it may reveal the need for replacement parts or cleaning.

The more severe consequences of a lifter tick are how it impacts the overall performance of the vehicle.

If the valve doesn’t open as much as it should, the motor doesn’t receive as much fuel and air as it needs. A faulty lifter may also prevent the engine from getting rid of a full charge on the exhaust.

How To Stop Lifter Tick

When a lifter tick persists or gets louder, it is imperative to nip the problem in the bud.

There is no sense paying for extensive motor damage or a total engine collapse when the problem is easily fixable before it reaches this point.

Many of the problems associated with noisy lifters are attributable to poor engine maintenance. When the oil is not drained once or twice a year, that’s a problem.

The same applies to using the incorrect oil.

Of course, to change the oil, you have to remove what is currently in the motor.

Another method is to use oil additives for noisy lifter silencing. Their addition to the motor can break down debris and sludge without the need for a complete oil change.

An additive can stop ticking after it has mixed into the oil after a couple of miles, and it doesn’t even change the density of the fluid.

Best of all, oil additives are inexpensive. This quality makes them an extremely useful tool against noisy lifters.

Several different ingredients go into additives, so here is what to look out for on the labels.

After finding your additive of choice, here is a handy guide on how to use them to clean your engine.

If the oil is not the source of the problem, then the next likely culprit for the noise is something that has shifted within the lifter.

The lifter is meant to go down as far into the bore as it can go, so when the rocker arm comes up, the valve is fully closed. This moment is the best time to adjust.

All you have to do is tighten the valve adjustment screen until there is zero lash. At this threshold, there should be zero clearance, and you should start to feel a little drag.

You should then be able to determine whether the lifter is properly adjusted or not, with the touch of a hand.

A couple of notes before we continue. Make sure to check the owner’s manual to verify the adjustments are in accordance with the factory settings, instead of making the lifters more susceptible to ticks.

For a visual demonstration of lifter adjustments, check out this YouTube tutorial from Your Engine Guy:

We mentioned that faulty pushrods are another cause of lifter ticks, so fixing these components would eliminate the problem.

If the rod is broken or even bent, replace it. Not to deter DIYers, but this tedious process is best done by the professionals.

If you are committed to doing it yourself, here is what you need: a ratchet wrench, a socket wrench, a new pushrod, and a new valve cover gasket.

Once you determine which pushrod is faulty, remove the rocker arm nut that is over the rod. IF there is a rocker shaft, use the ratchet wrench to remove that, too.

Next, take out the damaged rod by pulling it through the cylinder head.

It also doesn’t hurt to double-check the other pushrods to ensure they are not bent or deformed. Analyze the valve springs as well as rocker shaft, arm, and springs for wear and tear, too.

To put in the new pushrod, slide the new one through the cylinder head so that each rod is flush in the valve lifter.

Once completed, reconnect the rocker shaft or rocker arm. Finally, replace the valve cover and valve cover gasket, and do one last inspection to see that each is working correctly.

Phew, we made it. That is the list of everything that might possibly go wrong with your lifter and how to fix it. If you are intent on fixing the problem yourself, an essential first step is a proper diagnosis of the tapping origin.

Taking the time to target the source of the noise will let you swiftly and accurately figure out a solution.

It is generally possible to fix a ticking lifter with an oil change or oil additives.

Giving the engine the necessary lubrication and viscosity will go a long way towards high performance, a longer lifespan, and less noise.

If neither of those options works, consider making lifter adjustments or replacing the broken pushrods, so you can get back on the road.

As an Amazon Associate I may earn a small fee from qualifying purchases at no extra cost to you. This helps us run the site, so thanks for your support!